Yes it’s that time of year again folks – No not Christmas – Halloween.
Which, of course, means that all the spooky and horror film franchises will be releasing this year’s chillers to get you into the cinema.

The newest of these is the spooky Paranormal Activity series – well when i say spooky that depends on your point of view, some might say “daft”, “silly” “stupid” etc etc.
Paranormal Activity 3 takes us back in time to when the mother in Paranormal Activity 1 was a young girl and what happened to her and the rest of the family.
Just like in the first movie not a lot happens in the first 20 – 30 minutes of the film as the suspense slowly builds up.
The film is also shown through a series of video tape evidence filmed back in the 80’s.
There are a lot more jumpy bits in this film and a lot more happens than in either the first or second ones.
The people’s reactions in the cinema were a mixture of laughter and screams as the film transgressed into the more “spookier” bits.
It’s on a general par with the first film, so therefore a lot better than Paranormal 2 but there are several times that you think “ would you really pick up the video camera to then go investigate the noises you heard”

One thing I did notice however is that the main scene they use for the trailer ( the two girls in the bathroom mirror ) is not in the film, which is a little disappointing but i’ve noticed quite a number of movie trailer scenes recently that are then not in the movies they advertise.
Isn’t this classed as false advertising ?
So, anyway if you enjoyed the first film but thought the second one was “pants” then you should like this one but don’t expect a great deal and then you won’t be disappointed.

Reviewed By David
Family Entertainers for your Halloween Parties. 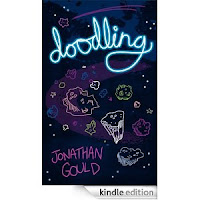 A charming story about Neville Lansdowne who fell off the world as he could no longer hold on because the world is moving too fast.
However as he is searching for somewhere new to live, out in the asteroid belt, he soon realises there’s danger waiting just around the corner which he must deal with or his new found friends lives are in serious jeopardy.

This is a short story and Jonathon Gould’s writing style, with a slight mix of satire, shines through.
If you were to mix up the novels “disc world” and “Alice In Wonderland” then you would have a general idea of where this story sits.

A wonderful mix of quirky characters and an action packed plot make it a must read suitable for all ages.
I especially liked the character on the aimless asteroid.

Doodling can be found in our BOOK STORE

Reviewed By David
Family Entertainers
Posted by MKP at 18:46 No comments:

Email ThisBlogThis!Share to TwitterShare to FacebookShare to Pinterest
Labels: Books - YA

Well this is most certainly a modern take on an old story.
I’m not sure whether the actors are hamming it up to make it serious or playing it for the laughs.
The original storyline is followed where a young hot head, D’Artagnan is sent off to France to become a Musketeer and becomes embroiled in a plot to discredit the queen and start a war with England.

But then the filmmakers decided to up the antsy by adding flying ships and even pinch a scene straight out of Star Trek : Wrath Of Khan which is set just slightly a few years in the future.

Although the film is quite nonsensical it is however still enjoyable in a fun kind of way as long as you try not to take the film too seriously.

Madds Mickelson & Orlando Bloom play the Panto style bad guys brilliantly without the slightest bit of a French accent in the whole film and Logam Lerman is also fantastic as the swaggering hot headed D’Artagnan.

The ending leaves it wide open for a second instalment – Can’t wait to see where they take it from here and which scene they will use from another Star Trek Movie.

Reviewed By David
Entertainers For All Occasions
Posted by MKP at 00:09 No comments: 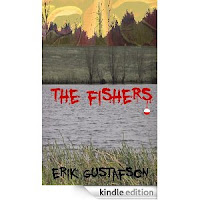 I was aware this was a short story before I started it but was not prepared for quite how short it is.
I settled down and planned to read half of the story and finish the rest the next day. Before I knew it, it was over.
This indeed would make a very good first chapter in a full length Novel or even a Novella.

Erik Gustafson makes this story extremely fast paced and it’s very much a page turner as we follow Dave and his father on their horrifying fishing trip.

If you enjoy fishing you might think twice about reeling in your catch after reading this.  ;)

I was a little confused over the ending as to what actually happened but maybe you will make more sense of it than I did.

This is the second piece of work I have read of Erik Gustafsons and I find him to be a very interesting author and hope to be reviewing more of his work soon.

The Fishers is now available in our Book Store

Reviewed By David
Childrens Entertainers
Posted by MKP at 00:49 No comments:

Dark Side Of The Mirror - R.L Austin 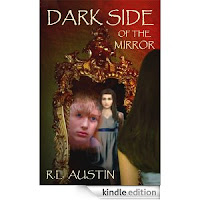 Dark Side Of The Mirror is an engaging story and quickly captures the readers imagination.
Emily’s parents have to relocate to San Francisco and with money being tight they have no choice but to stay with her uncle.
Shortly after the move Emily starts to hear voices from the mirrors all around the house and soon learns to keep this quiet otherwise her parents whisk her off to see a therapist.
But one day one of the voices actually talks direct to her – and so starts her adventure which includes hidden powers, an uncle who is not all he seems and a couple of family secrets that are about to change her life.

I would say that this book would be aimed at the YA market because of the way it is written. The story flows along at a steady pace but the descriptions are very minimal throughout. Saying that though I still thoroughly enjoyed the story and i’m slightly older than YA ;).

The characters are likeable and you feel like boooing every time Emily’s uncle makes an appearance and starts causing problems for Emily and her new friend Tyler.

The story has a definite ending however there are a couple of loose ends leaving the story wide open for a sequel or two.
So i’m looking forward to hearing more about Emily and her new found powers.

If you enjoyed the film “ The Adjustment Bureau “ then you should enjoy this book too.

Email ThisBlogThis!Share to TwitterShare to FacebookShare to Pinterest
Labels: Books - YA

Don't Be Afraid Of The Dark

An excellent modern horror/suspense film is a little difficult to come across lately and lovers of this genre of film have been let down several times. But now this has all changed with " Don't Be Afraid Of The Dark".

A young girl, Sally, is sent to live with her estranged father in a great big mansion of a house that he is renovating with his interior design girlfriend.
However things are not as quaint as they seem and when Sally starts hearing whispered voices she decides to investigate where they are coming from.
Her investigations release a nasty surprise for the new residents and it's up to Sally to get her dad and his girlfriend to believe her about the danger they are all in before it's too late.

The suspense is kept up all the way through the movie even though the reveal of the menacing creatures, that reside in the house, happens about half way through.
And although the setting, the" haunted mansion"has been done many times before, the story is still fresh with a novel storyline and an ending worth waiting for.
The young actress, Bailee Madison, who plays Sally steals the film with some excellent acting and i'm sure we'll be seeing her in some more films soon.

Reviewed By David
Corporate Entertainers
Posted by MKP at 00:00 No comments:

Rowan Atkinson is back as the inept "James Bond" style secret agent in this comedy sequel.

Mr Atkinson was reported to be  unhappy with the responses his first " Johnny English" film got back in 2003 and seems to have gone out of his way to make the sequel bigger, better and funnier.

This time Johnny English is brought back out of retirement ( well he was actually sacked for screwing up an assignment) to track down and stop some international killers carrying out their mission to assassinate the Chinese Premier.
Rowan Atkinson is in prime form doing what he does best - making us laugh.
The film has lots of the " Bond " chases, fights and girls mixed in with lots and lots of silly stuff going on to keep you giggling throughout.
Yes, I know there's been lots of "Bond" farce films but this time Rowan Atkinson and team have got it right and come up with the goods.
Oh and don't leave the film too soon as you'll miss out on the end of credits sequence.

Looking forward to the next sequel, hopefully in less than 8 years this time.

Reviewed By David
MKP Entertainment
Posted by MKP at 18:41 No comments: